on May 27, 2012
About a month ago, I got to meet my girl crush, Bethenny Frankel.  I read on Twitter she was coming to Chicago to do a bottle signing.  The event was at 10:30 on a Tuesday morning and the first thing I thought was, “I’m too busy, have too much work to do.  Can’t go.”


And then I had to smack myself upside the head.  What the hell good is it to work from home if you can’t sneak off and do stuff like this on a random Tuesday morning?  I slammed my laptop shut, threw on something cute and braved April’s biting winds to shiver along with several hundred other Bethenny fans to meet my idol.  The signing was like a machine, brimming with gleeful Jim Beam execs, an easy mix of lithe fashionistas and stay-at-home moms and a cache of Skinnygirl booze.  Veronica the Glammy was there, as was newly appointed coordinator of chaos, Jackie (who’s really short).


And of course, Bethenny – petite, pretty and poised.  She smiled at me and said hello.  I was star struck, kind of like that time I met Cinderella at Disneyworld, and I’m still not sure if I was able to choke out a hello in response.  She scrawled her signature “B” in red Sharpie across my three bottles of booze and two “Self” magazines (the cover of which she was gracing that month) and we posed for a photo.  She thanked me for coming and I was on my way.  It was a blur, but the highlight of my week.  Well, that and the 10,000 bonus miles American Airlines gave me two days later, but that’s another blog.


Like so many, I first heard of Bethenny Frankel when “The Real Housewives of New York City” debuted in 2008.  From the moment the show hit the airwaves, I was transfixed.  While I liked “The Real Housewives of Orange County,” the mother of this soapy franchise, I LOVED its East Coast sister.  The OC ladies were all trash and flash and it was clear they didn’t get the joke, which made watching them all the more amusing.

“The Real Housewives of New York City” was like “Sex and the City’s” catty cousin; it was a sophisticated fantasy that was just downright fun.  I loved the antics of the abrasive Jill Zarin, laughed at the delusions of Alex McCord and her appendage, husband Simon Van Kempen, rolled my eyes over Ramona Singer’s histrionics and appreciated the wit and warmth of Countess Lu Ann deLesseps (God, how things have changed.)


While the New York crew struck a chord with me for a lot of reasons, far and away, Bethenny Frankel is what kept me (and many others) tuning in each week.  It was more than her Greek chorus observations or the cutting comments to her fellow Housewives, though none of those things hurt.  For me, it was that she struggled with so many of the same things I (and a lot of women) deal with, particularly when you start checking a certain age group box on forms.  I saw a lot of myself in her.  She was a 30-something single in a sea of marrieds, had a boyfriend who was unwilling or unable to commit, wanted kids and feared her biological clock was about to go boom and stressed out over how she was going to keep the lights on.


And like so many, I’ve watched her meteoric rise from “underdog” to mogul.  Love her or hate her, you have to admire how someone can claw their way from a cast member on a reality TV show on cable to the cover of “Forbes.”  Take that Teresa Guidice.


As I’ve watched Bethenny transition from non-Housewife to Skinnygirl domination, I, of course, have wondered how to apply some of what she’s done to my own life.  Not that I want to be on the cover of “Forbes,” but would I turn down the cover of “Writer’s Digest” if they came calling one day?  Hell to the no.  Do I want to meet the love of my life, stop the thundering of my biological clock and move into a swank apartment?  Hell to the yeah.


And so, taking a page out of her book, “Place of Yes,” I’m throwing everything I can at my life and career to turn MY own hopes and dreams into reality.  Stay tuned – could be fun.


I’m out loud and proud over my admiration for Bethenny – she’s my girl crush.  And while I’m not writing her notes during study hall asking her to check “yes” or “no” if she likes me, I’ll continue to think she’s pretty fucking cool. 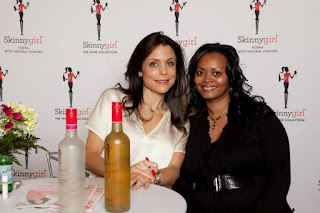