The Myth of the Writing Muse

on November 18, 2013
"You're going to be unemployed if you really think you just have to sit around and wait for the muse to land on your shoulder."  Nora Roberts


I was asked recently to help settle a debate among three aspiring authors in the throes of trying to produce a jointly written book about their lives—a memoir as I understand it.  One of the authors finished the first draft of his portion a year or so ago, while the two co-authors are in various states of production (one is about 75% done, while the other has maybe completed 20-25%).
The debate sprang up over the development of two prologues (two of the authors had each written one) and I was asked to choose which I thought was the better prologue. I declined to do so for a variety of reasons, one of which being that it was clear from the content and tone that they were each describing two entirely different books.  My advice was to put the (recently written) prologues aside until they came to true consensus about what the book was actually about.  The author of one of the prologues (who hasn't written their portion of the book) felt that putting the prologue aside would hinder his ability to write his portion of the book, because it was the only way to know what to write.


Well, here's the thing; you can't write unless you write.
Granted, writing non-fiction is a different animal than writing fiction, but I think the overarching principles are the same; in order to write the book, you have to write the book.  As Nora Roberts says, if you sit around waiting for the muse to strike, the book will never get written. 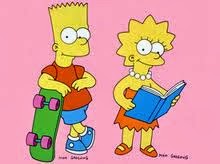 Of Bart and Lisa, who do you think is more likely to finish writing a book? (image from awn.com)
I can hear the fierce outliners out there calling for my head, so let me clarify a bit.  Clearly, everyone has their own writing process; some folks are dedicated outliners and can't start a book until they know exactly where they're going and how they're going to get there (plotters).  Others are more "situational," building their plots around certain circumstances the characters find themselves in, tending to write by instinct or by the "seat of their pants" (pantsers).  If you're writing non-fiction, my guess is you need a fairly solid outline, along with deep research (depending on the topic) to get the wheels cranking.
Still, unless you put pen to paper (or finger to keyboard, as it were) all the outlines and research in the world won't write your book.


I tend to be a "plotser."  I write narrative outlines, but don't live and die by them.  If a character or situation that I hadn't planned on shows up while I'm writing, I run with it.  Sometimes it works, sometimes it doesn't.  Either way, it's fun to give it a whirl.
No matter what your personal writing process is, until you write, you won't have a book.  If it means writing from 5 a.m. – 7 a.m. every day, 500 words a day, five pages a day, two chapters a day, from 9 p.m. to 11 p.m. each day, then so be it.  You have to just WRITE.


One of my favorite episodes of "The Simpsons" is "The Book Job."  Bart the Slacker and Lisa the Overachiever each decide to write a book.  Bart and his team crank out their pages while Lisa waits for the muse and all conditions to be right.  Guess who finishes their book?
On that note, back to writing.